I'm reading, "The Forest Lover" by Susan Vreeland and, inspired by Emily Carr's plein air adventures, I thoroughly enjoyed my painting today. Not that my work is anything like hers - but I did feel more in tune with what I was doing. Lincoln Park is a narrow strip of green between two roads, so you wouldn't expect much in the way of exciting subject matter. However the park is next to a beautiful church, has pepper, oak and redwood trees, and showcases several large sculptures. 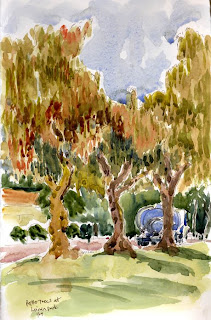 The lumpy trunks and delicate ferny foliage of three pepper trees grabbed my attention first. I liked the blue truck that was parked behind them too. I drew everything in pen, then got to work with the paint. I was busy with the foliage, then thought, ok I'll do the truck. I looked up and the truck was gone! Good job I'd sketched it in when I did. 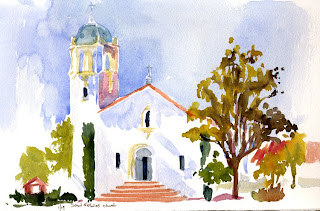 Next we went off and painted St. Nicholas Church. The light on this was exquisite, with pink/purple shadows on the side of the tower where the roof reflected the warm color. I did this purely in paint, no drawing in pen or pencil. The shadows changed quickly, so this had to be a rapid painting to capture the color and light. 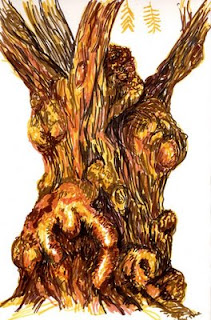 We had our lunch in the gazebo, and we were drawn to a very gnarly pepper tree right next to us. There were so many protruberances that you could imagine orcs, or trolls just under the bark. I did this sketch with my brush pens. 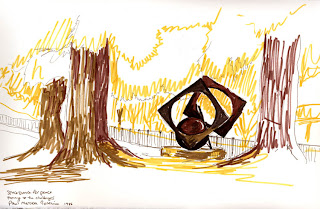 Lastly, I sketched one of the metal sculptures (Space Dance for Peace, by Paul Mercea Goreniuc) in a grove of redwoods.
Posted by Plein Air Muse at 5:04 PM 1 comment:

Rain cancelled play (or plein air) today! However I did a quick painting from my dining room window of silicon valley in rain and fog. We desperately need the rain so I'm not complaining and the colors are very different in the gloom. Happily, I noticed that one of the trees next to our house has blossom appearing - spring is here!
Posted by Plein Air Muse at 11:32 AM 1 comment: 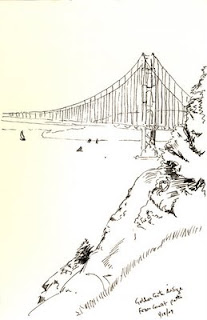 I just had the most perfect day on Sunday. The weather was gorgeous, we visited an art museum, looked at wonderful art, and we walked on the coastal path with views of the Golden Gate Bridge. I even managed a quick sketch of the view. It doesn't get much better than that! The trees leading down to the coast path were giving off the scent of pine and eucalyptus. The sky was blue and lots of little white boats were sailing in the bay. I should have more boats in my sketch, but hubby decided he'd sat on a rock for long enough and we had to move on!
At the Legion of Honor museum in SF you can get a quick overview of the history of art in just a few galleries. I loved looking at the different painting styles and subjects, but enjoyed even more watching the progress of fashion through the paintings. I was very interested in an early painting called "Two scenes from the Passion of Christ", by a German artist c 1500-1530 Master of Cappenberg Jan Baegert. This shows the torture of Christ by flagellation (in this case beating with bundled sticks) and the crowning of thorns, all taking place in an impressive looking building with columns and tiled floors. The men doing the torturing are carrying sticks and wearing amazing brightly colored shorts and vests with scalloped edges. The effect is of a lot of cheerful bright colors and theatrical poses, which seemed rather at odds with the very serious subject matter. You can check out the painting on the Legion of Honor's website www.famsf.org/legion by searching their collection for "Master of Cappenberg".
Posted by Plein Air Muse at 9:14 AM No comments:

Wow, seems like we're already well into 2009 and I've hardly drawn breath since Christmas!! Here's a mammoth posting of a couple of recent sites, and, (in the spirit of new year countdowns) my personal 10 favorite plein air sites!
Firstly, here are a few sketches from a hastily organized hike and sketch in Joseph D. Grant Park that took place on December 31st. We had originally organized this for the 30th, but that day dawned foggy and gloomy and totally uninspiring, so we chickened out until the next day. To our horror, Dec 31st dawned even foggier and gloomier. However, a contact informed us that the fog was absent in the valley we were going to, higher in the hills, so off we set with trepidation. True enough, once we drove higher we emerged from the fog into blue sky and sunshine. The view down into the valley was spectacular. White fluffy fog stuffed the valley below and the blue tips of the Santa Cruz mountains rose in a long wiggly line above it. Unfortunately there is nowhere along that road to stop and paint so sadly no sketch of that. 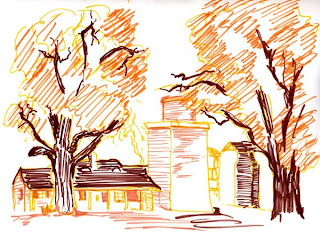 Joseph D. Grant Park is sufficiently off the beaten path to be very quiet and empty, especially at this time of year. The site was originally home to the Ohlone Indians, but the land was granted to the Bernal family in the early 1800's and the Grant family acquired it in the late 1800's. Joseph D. Grant was a successful and prominent business man with interests in numerous large companies of the time, including the Central Pacific Railroad. The mans' influence was such that he was able to have the only area road moved further from his home so that he had more privacy! Above is my quick sketch of the ranch house and water tower. 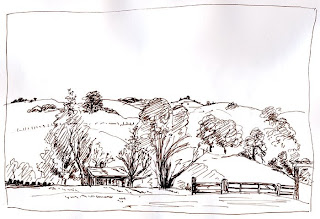 Above is the view from the Ranch garden, where we had lunch, looking up towards the Lick Observatory. 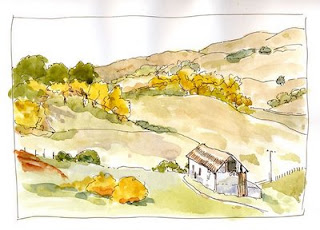 We rambled on towards the Snell Barn and stopped at a water station to capture the view. Some of the trees are still looking very fall-like with their bright foliage. A couple of horse riders stopped while we were there and let their horses slurp the water. It was a very gentle rural scene, wanting only a yodelling goatherd on the hillside to complete it!
Despite the sunshine, it was a little chilly in the shade, so we hiked on. For our final stop we found a lightening blasted tree which looked interesting against the backdrop of the hills. We set up and sketched until we got cold. When we moved off down the hill a bit we found an even better view of the tree - but we were chilled by then and didn't stop to repeat the sketch! 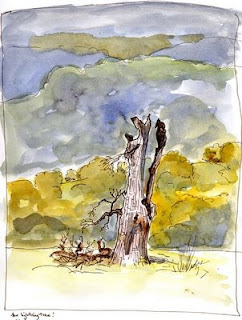 Our most recent paintsite was Las Palmas Park, Sunnyvale. This pretty park, with its ring of large Palm trees has fun stuff for children and dogs and is a great meeting place for mums and dog owners. Unfortunately the water pool was dry - so no reflections for us to paint this time, but the trees and people were challenge enough. 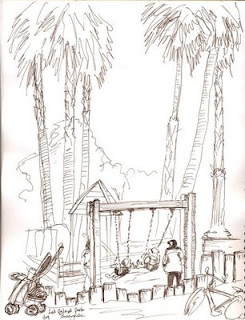 Using artistic licence (!) I made the trees somewhat shorter than they really are so that I could do the people at a reasonable size. This was sketched to the accompaniment of screaming as a small child threw a temper tantrum. The screaming lasted for some considerable while, until the poor mother eventually gave up and took the child home! I felt bad for her, remembering back to when my children were small and had inconsolable screaming fits for no apparent reason! 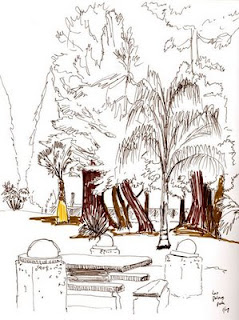 I moved closer to the dog park to draw the trees beyond the picnic tables. From the dog park came shouting as a couple of dogs got into trouble (must have been something in the air that day) and "No, Ginger" and "Bad Dog" echoed around the trees. This day the weather was glorious to start, then got cloudy and cooler. By the time we had lunch, we were all frozen, so we drifted home quite early. I had intended to put some color on the trees, but didn't wait around to finish it.
Posted by Plein Air Muse at 11:27 PM 1 comment:

O.K. everyone has a top 10 at the end of the year, so here's mine. Based purely on what I enjoyed the most here are my favorite sites for painting/sketching over the last couple of years.
At #10 Santana Row -a teaser! Haven't sketched here in a while, but the site is coming up next month so look out for that set of paintings!
#9 Emma Prusch Farm - loved this site for the chickens. A large variety of stuff to draw, animals, plants, farm house, machinery etc. 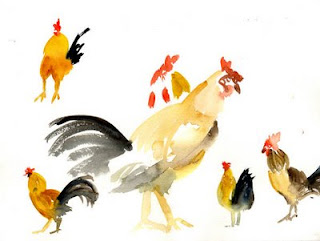 #8 The Rosicrucian Museum - A museum with Egyptian buildings and artifacts - beautiful, and very different. 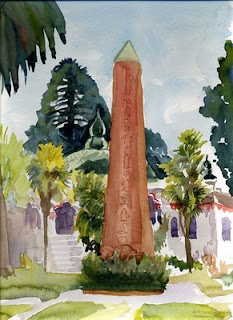 #7 Ardenwood Historic Farm - we visit here in the fall for the Pumpkins, but they also have Christmas celebrations which might be fun to see. The house is stunning, and hard to paint. I loved this view of distant pumpkins as I was leaving, so I tried to loosely capture them in a sketch that was quick and wet. 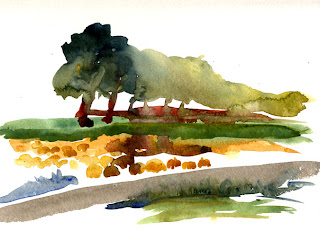 #6 Stanford University - so much to sketch here, but my favorite spot is the Main Quad. (see pics on Dec 24th blog entry) The Rodin sculpture garden is fun too, also the cactus garden.

#5 Winchester Mystery House - an overwhelming amount of stuff to paint here. Such fun! This is one of the sculptures at the front of the house. 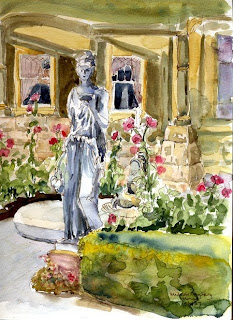 #4 Coyote Hills - I love being near the Bay and Coyote Hills is a perfect place to hike and sketch. There are views of the Bay and surrounding hills, plus lots of birds down on the marshes. The mud alone would give inspiration for dozens of abstract paintings! 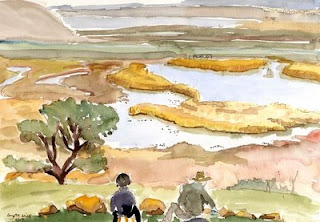 #3 Point Lobos -Stunning vistas of rocks and crashing waves, the California coast is spectacular. The rocks are hard to draw, and my paintings of the sea not so successful, so here are trees. I also did a color study of the plants on the cliffs in China Cove. 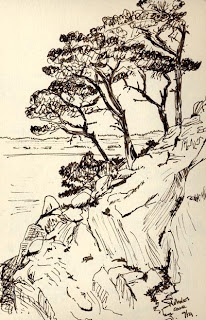 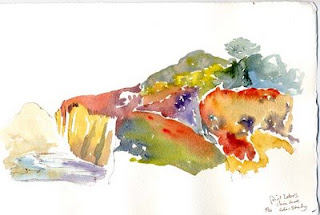 #2 Hawaii - sketching the lava flowing into the sea from a volcano has to rank among the greatest sketching opportunities ever! 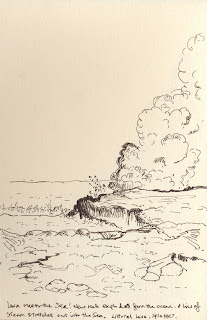 And -
My all time favorite #1 sketching place was, (drum roll here...) 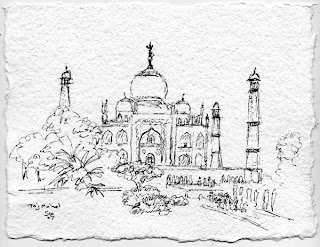 #1 India - Just the most amazing place to visit. These are my sketches of the Taj Mahal and also some of the tombs in Lodi Gardens, New Delhi. 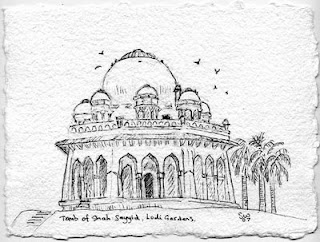