I've been a slacker of late and not posted for weeks, even though I've been painting. Shame on me! Anyway, here's the art from the last several weeks. 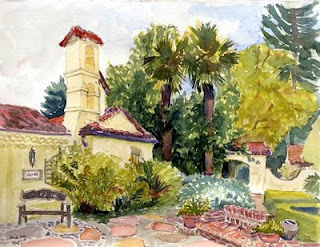 Allied Arts
I just made a larger sketchbook, 12 x 16, so I'm doing a bigger picture, but only one per paintsite as it takes longer. The problem then is that the light and shadow change such a lot in the hours I'm spending on one painting. Its hard to know when to stop and just go complete the thing at home. For this one I just kept going so the lighting is a little inconsistent. Sigh. 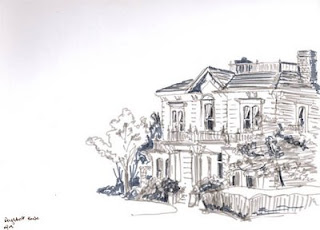 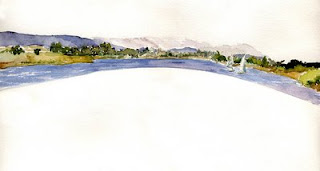 Rengstorff Mansion
I started out with the black and white sketch of the house. There are so many fiddly details on it that I got exhausted after a while and went and talked the next few hours away with a painting buddy!(way to procrastinate) I did manage a panoramic view of the lake and hills beyond. The big white space at the bottom is mean to be grass, but I thought if I painted it all green that would be all you would see. Hmm, there's a lot of blank space in both of those, an accurate picture of my brain that day! 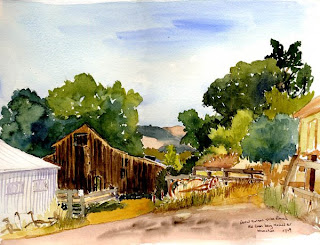 Bernal Gulnac Joice Ranch
This was a lovely spot. Lots of deer and quail wandering around, and a nice shady tree to sit under. The barn in the painting is due for renovation so it will eventually be all fixed up and the deer won't be able to wander in for shade. Too bad really, it looks quite picturesque in its broken down state. 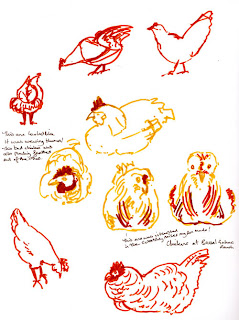 You know I can't resist chickens when they're around, so I did some quick sketches of these in their little chicken coop. One of them was fascinated by the squeaky scratching noises my brush pen made. Another was a lovely caramel color and a very interesting shape - she looked like she was wearing bloomers from behind. She was the mean one though - kept sneaking up on the other chickens and pecking their feathers out.
Posted by Plein Air Muse at 1:01 PM 2 comments: