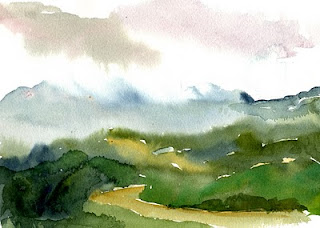 We had a hike and sketch planned for today - the weather turned out showery so it was just Jenny and I, two hardy souls! It was worth going out though. The colors were beautiful, both in the sky and landscape. We've had so much rain that there are still flowering bushes and loads of wild flowers blanketing the hillsides. We stopped a couple of times to do very quick sketches. I wanted to paint, but our pen sketches got splashed on, so paints were out of the question. Then we went up to Hunters Point. We stayed up there for an hour and ate our lunch - probably not a wise idea as we got very cold. The panoramic views there are wonderful though. I did a couple of paintings. I worked wet in wet and splashed on the color very quickly before it could get rained on. I was very pleased with the way I managed to capture the hills disappearing into the mist in the first one. (top) 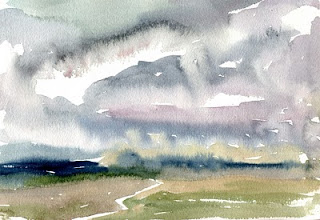 The second one came out more abstract. The light was just hitting a road down in the valley and it provided an nice white line in the landscape. When I got home I thought the sky could do with some more work, so I softened some of the blooms and the hard edges. In the event I think I ruined it. So, abject lesson there, keep it fresh and leave well alone! 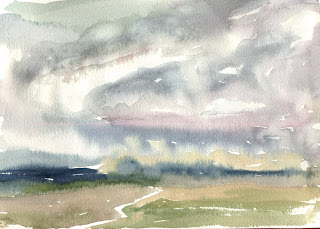 A week in which I get mooned and have my portrait drawn... 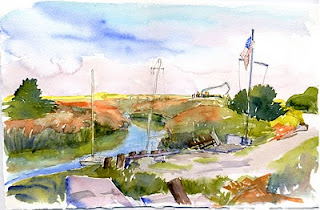 Alviso
Today's paintings are from Alviso on the bay. It was peaceful in the immediate vicinity, but off in the distance a big hole boring machine was thumping its way into the earth and workers were clustered around a truck with a crane. The marshes here are very colorful. There were lots of flowers still about because of the continuing rains and the tule reeds are tipped with orange. Flowers are great, but beware of "blooms" in your paintings - I was fairly happy with my colorful painting until I looked closer at the sky. Is that the Alviso "moon"?! Yikes! I'll have to go back and do something with it. 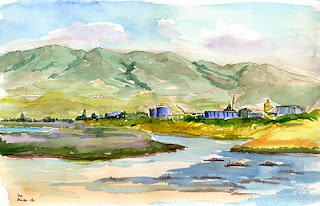 Closer to the bay the water was beautiful - the waves had a golden look to them. I was attracted by the storage silos and various small industrial buildings near the water. The hills still have a green blush to them where they haven't quite dried out yet. Another month will see an end to that. 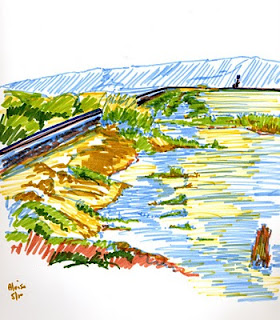 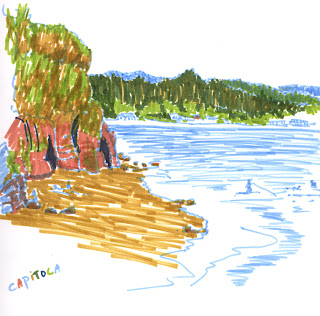 Capitola
On the weekend I went down to Capitola to meet up with another artist and do some sketching. The day was glorious and Capitola was bustling. I'm not a people person really, so my sketches make it look like we were pretty much alone out there! I did a quick sketch from the end of the esplanade looking at the cliffs. Then I turned around and started a painting of the beach view with the cliffs and the pier. I continued drawing with my brushpen on the watercolor paper and actually like the feel of that. The drawing was in light blue, so not too scary looking. While I was painting I turned out to be the perfect subject for another artist sitting on the grass to sketch! 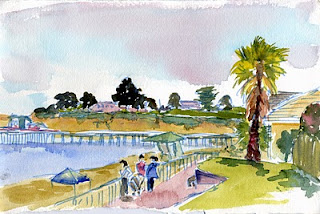 Unfortunately I was talking the whole time I was painting, so it didn't turn out too well in the end. There was also a lady with a bulldog right in front of me and I so wanted to draw the dog. I got my sketchbook out and put it on my lap, under the watercolor. Then when the dog stayed in one position for a bit I scribbled a sketch, then when he moved I went back to my watercolor. Talk about multitasking! Daft idea all round. The bulldog was definitely the best bit though! 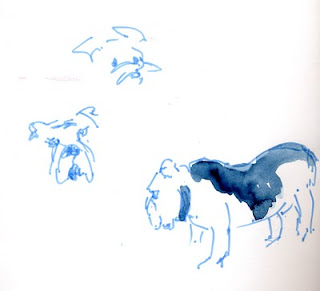