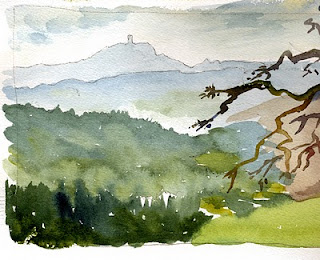 Well, after all the rain we finally had a beautiful day to be out painting. Guadalupe Oak Grove is a gorgeous little park with hills for views and lots of oak trees and lichen covered rocks to tempt the artist. Sadly I was out of practice. I tried to capture the sweep of the trees and hills, but my trees left a lot to be desired so I cropped them out of the sketch! 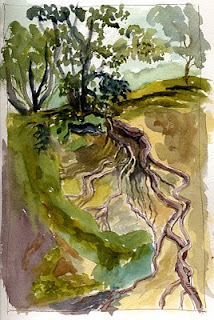 I tried to portray the feeling of a bush perched on a ridge, its large exposed roots snaking down the rock face. The ridge was a quilt of soft oranges, browns, greys and yellows with patches of green moss clinging to its swellings. The roots looked strong and purposeful, as though they were responsible for holding the ridge in place (and perhaps they were). I don't think I quite did it justice. 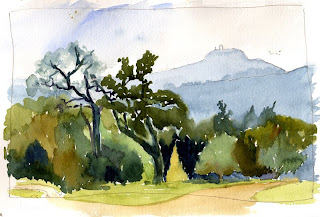 Later Jenny and I climbed a steep hill for the views and were struck by the sight of a tree and rock almost melded together. On closer inspection it seemed the tree limb had been trimmed and the rock was worn or scraped underneath. Whether this was by human design or nature we couldn't tell. The rock and tree both had the same pinky hues and minty green splashes of lichen as though both had absorbed the others' nature through a long marriage. We hastily sketched the lines of branches and rocks, swearing to rush home and add the color. My sketch lies naked and unresolved in my sketchbook still. Tsk. Tsk.
Posted by Plein Air Muse at 9:53 PM 1 comment: