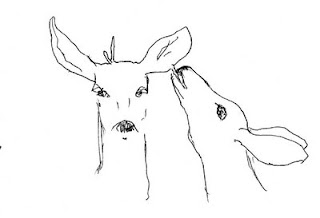 Breakfast this morning was disturbed by a loud clattering outside on the deck which caused the Scrub Jays and squirrels to go beserk. I looked out and was surprised to see one of last years' deer fawns paying a visit. He paused to see what response his ruckus had made and when nothing bad happened he trod warily across the deck, in that "step, pause, step" way that they do, and disappeared down the steps to munch on the rose bushes. I noticed he had a single tiny spike antler growing, with had an even smaller spike right next to it (nothing on the other side). I've nicknamed him "Spike" of course! His sister eventually appeared too, but while Spike was filling his stomach she just stood and watched. Eventually Spike rejoined his sister and she greeted him by pawing his shoulder and licking his neck and shoulders. Periodically he would rub his head against her and she would enthusiastically clean his ears. After a few minutes they retreated under the deck to rest and digest.
Posted by Plein Air Muse at 9:06 AM

for a minute there i thought she was eating his ear! hehehe.
this reminds me of sketches i do sometimes that accidentally end up interacting with each other...I'll do a sketch of something and then do something completely different right next to it, unaware that they look like they're in the same picture!