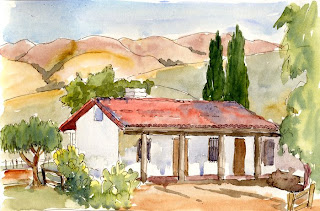 The "Casino", an original redwood building dating from the 1850's. This building was used as a saloon, gaming hall and, allegedly, a brothel! I discovered that the Sycamore tree behind the building is the largest in Milpitas - I thought it was two trees!

These sketches and painting were done on a gloriously warm and sunny November day. There was no-one around but us painters and a few cows in the field so it was lovely and peaceful.
This small historical park in Milpitas has the remains of an adobe built by José Higuera circa 1828. José Higuera was granted the land in 1821 by the last Spanish governor of California and this adobe is one of the oldest buildings in Milpitas. The current building is a shell, built to protect the remains of the adobe.
Prickly pear cactus that originally formed a hedge around the central compound of the rancho can still be seen at the site, as can pepper, fig and olive trees supposedly planted by José Higuera. 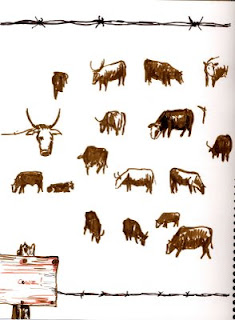