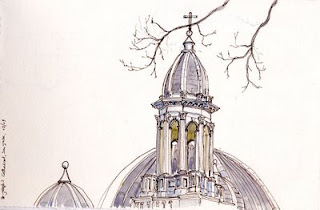 I was very disappointed the first time I ever visited downtown San Jose. It's not like a real city bustling with people and shops. There are one or two streets where you see activity and the odd cafe, but mostly its like a ghost town. It really lacks a soul. There are some attractive buildings though and the two of us painted across the street from St. Joseph's Basilica and San Jose Art Museum. When I got partway through my first drawing I realized that I needed bigger paper - or a magnifying glass to work smaller. No matter what I did I could not fit it on my paper. After several attempts - getting gradually worse, I switched over to the museum building and finally managed a brush pen sketch of that. My heart really wasn't in it though. 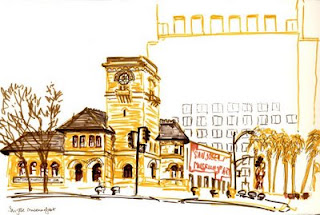 I visited the art museum and looked at some art for inspiration. The exhibit of Jack Stuppin's landscapes was interesting, but sadly there were too few paintings. He used to be a big plein air painter, but has taken to the studio to create his art. His landscapes are brightly colored with fun textures for foliage. They are happy enough paintings, but they didn't really speak to me. There was an exhibit of photographs of Frida Kahlo and, being familiar with her work, I found these interesting. Here was a woman who created art through all kinds of pain and trauma. Very inspiring. 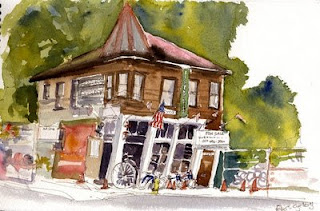 So, after a quick lunch I moved on to a building I'd seen a few weeks ago and wanted to paint. Its the Faber's Cyclery shop. Yes, the building really is crooked! Built in 1884 its got loads of character. The building is currently for sale - and hopefully some civic minded person will buy it and save it for posterity. Surprisingly there were a few people about, and several stopped to look at what I was doing. I was very much in the "zone" though and barely noticed them. A young tattoo artist also stopped to see what I was doing. Had I been more "with it" I would have asked to see his artwork too. Amazingly I was sat in the sun for the entire time doing this painting, but clouds did come and go. Eventually, I stopped painting, and it rained again. Timing is everything.
Posted by Plein Air Muse at 5:40 PM

Nice cylcery! (feel like that should say 'celery' hehe!) I have problems with getting things all on one page too! So weird how that comes about...