A busy week at work. We are always having some sort of computer problems there. Always random and short lived, just to make our jobs more challenging. This week, after several unsuccessful attempts at printing a simple notice, the computer announced (in a Stephen Hawking type voice) "It's.. not.. my.. fault." I have never heard a computer apologize before - it really cracked me up! 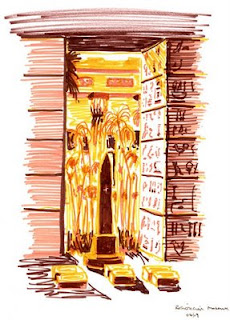 Inside a temple
My visit to the Rosicrucian Museum in San Jose this week was hopeless painting wise. Shame, as its a pretty enough place with its Egyptian temples and courtyards. The Wisteria was blooming beautifully, but in the shade mostly. My first sketch from inside one of the temples was a reasonable start, although I didn't quite capture the feeling of backlighting on the papyrus plants. 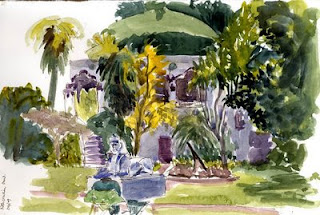 Then I tried a watercolor sketch of a domed building with a lovely sculpture in front of it. There were lots of light and dark areas, but somehow I lost those in my painting and muddied my greens. I was thinking tones, but my hand had another agenda. Maybe it just needs more work, or maybe its overworked already... Okay, its one for the recycling bin. 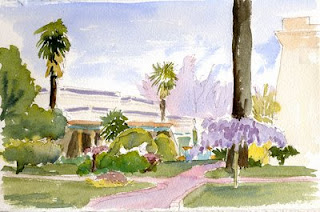 My last effort would probably be passable with some more work. I liked the Wisteria on the right and should probably have just focused on that. There was a lovely bright yellow bush behind it, which could have been a great abstract feature.
Ah, well. Sometimes the painting muse just can't be conjured up.
"Its.. not.. my.. fault"!
Posted by Plein Air Muse at 11:51 AM