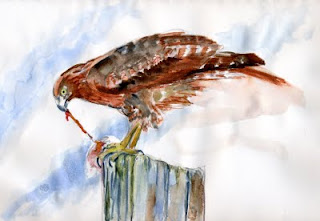 Our resident Juvenile Red Tailed Hawk proved his hunting prowess today. He perched on a post with a bird he had caught. Tearing it to bits between talons and beak, the victim was consumed in less than 15 minutes. The hawk accidentally dropped a portion of the entrails onto a lower part of the post and took a minute to figure out how to hop down there to scavenge it without falling. He also spent some time scraping all the crevices of the post to ensure that every scrap was eaten. The only parts discarded were some of the feathers that were plucked off and tossed into the wind. He stayed on the post for over an hour preening and, no doubt, digesting.
This sketch was done from my photos. I started with the watercolor pencils, then added some paint.
Posted by Plein Air Muse at 10:16 PM